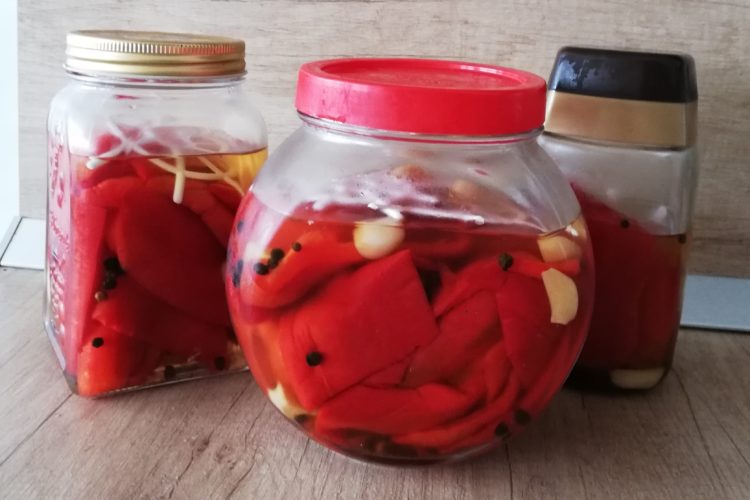 I don’t know about you but I usually eat pickled food in winter, especially pickled peppers, cauliflower and cucumbers. When it comes to fermented foods such as sauerkraut and kimchi, I make it all year around and preserve it in small jars.

Both pickled and fermented food can be high in sodium, so you shouldn’t it too much. These pickled peppers are a great winter salad and you will need to wait only 3 weeks to eat them.

How to make pickled peppers

If you want to avoid the usage of preservatives, you can try to make fermented peppers instead of pickled ones by excluding some ingredients from the list. But, I cannot promise the taste will be the same. These pickled peppers are sour and crunchy, not too salty and the sweetness of red pepper is preserved.

Wash the peppers, remove the seeds and stems, and cut them vertically. Depending on the size of a pepper, you can get two to four pieces, i.e. cut peppers in half or fourths.

What to do with other ingredients?

Read the instructions on the acetic acid package, because it should be cooked with water for 10 minutes or so. It is usually ratio 1:7 (acetic acid:water) but it may differ from brand to brand. When the acetic acid is cooked, add other ingredients and stir well so sugar and salt melt.

Pour the preservative mixture over the peppers and put something heavy on them (another bowl full of water, or a heavy pot, rock). If you put the peppers in two or more bowls, you need to divide the mixture. Don’t worry if the peppers are not immediately soaked in water.

Leave the peppers to rest until the next day, for at least 12 hours. When the time comes, you will see that peppers are soaked in water. Take them out but keep the water.

Prepare the jars by washing them and cleaning them completely so they are bacteria free. Fill the jars with the peppers by laying them vertically.

Add a few cloves of garlic and black peppercorns between the layers of peppers and repeat that for every jar. You can add as much garlic and pepper as you like but make sure they are tucked between peppers.

Pour the water you saved (in which peppers rested for 12 hours), equally in every jar. Leave the jars opened the next 24 hours and then seal them tightly and put them in the fridge. You can open the first jar with pickled peppers after 3 weeks.

Peppers should be soaked in liquid completely. If there is not enough liquid for all the jars, don’t worry. When the jars are left open for 24 hours, put something heavy in each jar, so the peppers are soaked in water. They will release theirs own juices in that period and when the time comes to seal the jars, they will be covered in water. If it is possible, you can leave the heavy object you used to press the peppers in the jar.